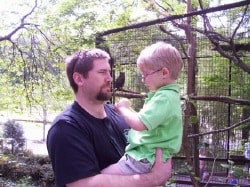 Just 2 months prior to his 37th birthday, Shaw’s colon cancer had been labeled “terminal”. Shaw’s wife, Jinny, knew it would be important to capture tangible memories for their eight-year-old son, Austin. On February 3, 2010, we had our first meeting with the Wylie family.

During our 2 hour visit, we learned that Shaw had a goal of reading his Bible cover to cover, and he was making serious progress. He took notes along his “Bible Reading Journey” and those will truly be a precious keepsake to pass from generation to generation.

Shaw was quite a cook and had a few special recipes that he created. His favorite (and Austin’s, too) was his spaghetti sauce. To preserve this for Austin it will be embroidered on an apron in purple (Shaw’s favorite color). A shadow box will be made for Austin to hold some of the items most treasured and representative of Shaw including his Grandfather’s Bible, a saxophone, a Christmas Village piece, his Baptismal handkerchief, Trivial Pursuit cards, a page from his “word Search Book”, and more. And finally, impressions of Shaw’s thumbprints were made into charms, a book of letters from friends and family will be preserved, and a quilt will be made from Shaw’s clothing for Austin.

Our time with Shaw was so short as he declined very quickly. We are looking forward to working with Jinny to complete the projects Shaw had decided upon. Please keep the Wylie family in your prayers.