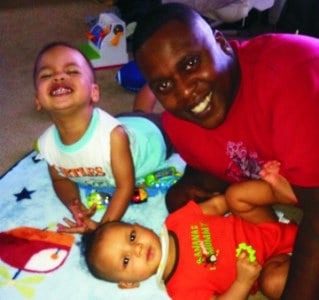 We first met Richard at the end of September 2013; he was returning from shoe shopping with his son, an activity Richard enjoys and treasures.  Richard’s wife, Deanna, put the little one’s (ages 1 & 2) down for a nap so we could interview Richard.

Richard has so many life lessons he would like to share with his three boys, but his energy level is low and he is having trouble concentrating.  He hopes to write letters to them covering some important topics and events in their lives.  He would also like to have a collection of letters from his Friends and Family written to his boys so that they can get to know him through the eyes of others.  During our first visit, we created thumbprint charms for the children, scheduled time in a recording studio so Richard’s violin playing can be captured, booked a family photo session with a photographer, and planned for each of the children to have a quilt.

Please keep Richard. Deanna, and the boys in your thoughts and prayers.

If you personally know Richard and would like to contribute to the book of letters to his children, please read this: Dear Friends and Family of Richard Boyles