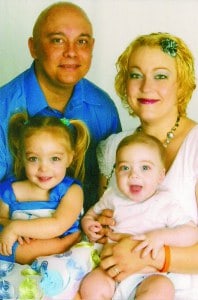 Ryan, his wife Eileen, and 2 children (Autumn, 2, and Marley, 6 months) became part of the LTBM family in early April 2012.  Theirs is a story you won’t soon forget.  At the age of 33, Ryan is in a fight for his life against Leukemia.  When we met with them, Ryan was in need of a bone marrow transplant.  Eileen was working frantically to keep things clean and germ-free for Ryan, as he needed to stay healthy in order to be a candidate for a transplant.  Ryan was scheduled to go to the hospital on April 12 to receive a bone marrow transplant from a “close match”.

The interview was originally scheduled for April 10, however within an hour of setting that appointment Ryan’s doctor called and gave the family the great news that a “perfect” bone marrow match was found for Ryan.  Eileen called us back and moved the appointment up by one week to April 3.  During the interview, Ryan and Eileen decided to have LTBM make scrapbooks as well as quilts and teddy bears made from Ryan’s clothing.  Ryan is very artistic and decided he would also draw a picture for each child which we would frame along with his thumbprint charm.  A few hours after we left, the doctor called and said the “perfect match donor” had backed out.  The family still praised God for the “close match” that awaited Ryan.

On Saturday, April 8, just five days after the interview, while coming home from a Spring Church Festival, Eileen and her children were in a tragic car accident.  Thankfully the children were not injured, but the accident claimed Eileen’s life.  We found it most fitting to include Eileen’s clothing in the quilts and teddy bears, as well as create the scrapbook to tell the story of her life as well as Ryan’s.

In May, Ryan received a bone marrow transplant and is currently undergoing his 100 days of isolation.  It will be a long recovery road, both physically and emotionally.  Please keep the Petters in your prayers.