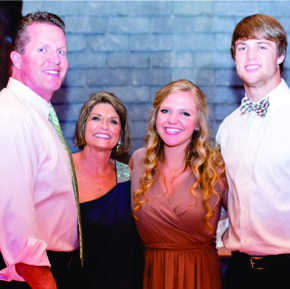 In March 2015, as we pulled into Bobbie Nicholson’s driveway, it was apparent right away that she was a force to be reckoned with. She strolled outside while on the phone with her son, and even in her frail state, gave her in parenting conversation as much spunk and spark as she could. At 54, Bobbie (aka Bob to all who adored her) was battling Appendiceal Cancer. Her family, made up of her husband Tommy, and their two children, Blake (19) and Allie (17), was the most precious thing to her.

During the interview process we learned of Bob’s love for Clemson and her tailgating rituals. She liked to read – her favorite book was The Last Lecture. She loved bright colors – pink was at the top of the list. She did not like to cook, however, there was one recipe that has been passed around her family that she enjoyed making for her children and they claimed it was their favorite lasagna.

In addition to the ever popular thumbprint necklaces, Bob chose to have quilts made for her children as well as a tailgating tablecloth/blanket made from her abundance of Clemson clothing. Like so many of the parents we work with, Bob’s greatest fear was missing out on moments with her kids, not just big milestones, but also the day-to-day moments that we so often take for granted. Bob did select some gifts for the future that will be given to her children during “big moments” such as college graduation, wedding, and first babies. A couple of those future gifts have now come and gone, such as the prom and graduation bracelet and earring set for her daughter Allie, made from sunflowers, one of Bob’s favorite flowers.

Bobbie finished her time here on November 12, 2015, in great spirits, she gave it all she had! Every family member and friend of hers that we have met cherish the impact that had on their lives.